With the weather being so beautiful recently and the water getting warmer it’s close to a necessity to get outside and do something and one of the best options is the beach! South Beach this time of year can be quite busy with people visiting so another option for Miamians who want to avoid the traffic and tourists of South Beach or visitors who want something more laidback and less busy, Miami’s own “Key”- Key Biscayne- is a great alternative.

Key Biscayne is not actually part of the Florida Keys geologically, but I do think it’s a nice Key-like escape from Miami and the Miami beaches. The drive to Key Biscayne is beautiful with long expanses of blue ocean populated with numerous boats and sails and framed by either green palm trees or sandy beaches. The beaches are more laidback and because the main public ones sit on parks, instead of busy streets and condo high rises, they seem more tropical and secluded. At Crandon Beach Park there are grills and picnic tables all over the park (first come, first serve unless you reserve one of the pavilions/group areas) you can really make a nice day of it, as well as take a ride on the restored carousel. The water at Crandon is also very calm and shallow, due to a sandbar, which can make it more relaxing, but also the water can get quite warm as the year goes on. The park is quite large, with a north and south section, so there is a lot to explore including nature trails and dunes.

There is an actual village of Key Biscayne, south of Crandon Park, which is a nice stop before or after the beach for supplies, food, or frozen yogurt. Another point of interest on the island is the Miami Seaquarium, which you will pass on your way to Crandon State Park. For an alternative to Crandon State Park there is Virginia Key to the north and Bill Baggs Cape State Park at the southern tip of the island, which is rated as one of the top beaches in the country.

A few logistical details to know about visiting Key Biscayne. The only way onto the island is the Rickenbacker Causeway, which has a $1.50 toll heading to the island. Crandon Beach Park also has a fee of $6 for the day on the weekends, $5 for weekdays to park your car. Virginia Key is $5.00 per car and Bill Baggs Cape it is $8.00 for cars of 2-8 people, $4 for a car with one person. 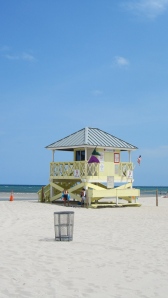 One thought on “A Miami Escape to the “Key” (Key Biscayne, Beach)”