I’ve been severely lagging on blog posts since about December until recently, but I became re-energized and am ready to catch up! A potential one I definitely needed to write is from my San Francisco trip over New Year’s. If you even semi-follow my blog you know that almost any West Coast mention/trip is usually accompanied by a sentence raving about all gluten-free options… this is no exception but I’ll spare you some of the predictability by not including the same line again. Mariposa Baking Co. is really special though because the gluten-free options are INSANE! Probably one of the best I’ve seen probably ever! I suppose a lot of options are to be expected for a bakery exclusively gluten-free, but they are all such delicious options!

Mariposa Baking Co. is inside the Ferry Building Marketplace on the Embarcadero. It took me a second to track down where in the building it was, but it almost made it more special to explore and stumble upon it. I’ll try not to sound too dramatic by saying it was almost breathtaking, but it kind of was when you saw all the options. They had multiple types of bread, cookies, pretzels, scones, quiches, bagels, pizza crust, cakes, brownies, biscotti cinnamon rolls, and the list goes on. Additionally they had some hot food that you could order like a vegetarian pizza or spinach empanada. It was like “a world of pure imagination” for gluten-frees!

I have a lack of willpower resisting when I come across one or two gluten-free things at a normal restaurant or bakery so you can only imagine the many hard decisions I had to make in choosing something (well at least several things) and not going absolutely nuts with my purchases! I had to get some cookies (my favorite baked sweet) and a bagel (one of the top things I crave- although unfortunately they were out of cream cheese). I also got a cheese danish since I’d never had one (gluten-free or otherwise). This is where I gained a little willpower because I was almost about to get a pretzel and a few other things but decided not too. I instead settled for getting one of the hot foods, which was the spinach empanada.

Everything was moist and delicious. Despite not having any cream cheese I did still enjoy the bagel and the cookies were a good crispy with a little bit of gooeyness. The cheese danish was delicious and I liked it being both sweet and savory. The spinach empanadas were definitely my favorite because it was all anyone could want from an empanada I think (plus had really never had anything like it gluten-free). It seemed like the real (gluten) deal. Overall everything almost seemed too gluteny to be true!

If you’re in San Francisco (or near their Oakland location) and gluten-free you need to visit Mariposa. It can feel so many cravings and desires that us gluten-frees have. Definitely worth a detour even if you’re not close to the Embarcadero. You won’t regret it! 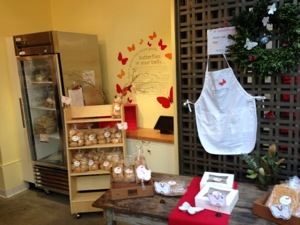