Posted on April 20, 2013 by portlandermiamian

When I lived in Brickell I often went to Key Biscayne when I wanted to go to the beach. Key Biscayne was close and it was much less touristy and crowded (ie. for me much more relaxing) than South Beach. I previously always had gone to Crandon Beach State Park when I visited the island (see general post on Key Biscayne here). I really love maps (people always laugh when I say that out loud for some reason…) and knew that there was a place called Bill Baggs State Park at the southern tip of Key Biscayne from studying the map but hadn’t visited- all my friends always went to Crandon.

Something I love almost as much as maps is Twitter and one time I saw an article of the top beaches in the entire country and Bill Baggs were on it. I got really excited to check it out!… well as excited as a person can be when they still wait about a year to visit. I still went to Key Biscayne often, but either my friends wanted to go to Crandon or I just was lazy about trying a new place. However the other weekend I wanted to finally follow-through and one of my friends was totally down to visit on a Sunday!

On our arrival on Key Biscayne (took a bit longer than usual because of the construction on Bear Cut Bridge as of Spring 2013) but we passed Crandon Park on by and headed into the town of Key Biscayne. The town of Key Biscayne is actually pretty cool in my opinion. Feels sort of like a small suburban town with a beach vibe but still has quite a lot of businesses and restaurants along Crandon Blvd. Just watch out for yippie little dogs that like to bark into windows and scare your driver!! As the town ends you hit the boundary of Bill Baggs State Park. Parking is $8 (Crandon is $6) and we found the park pretty busy, but there still was a lot of parking.

After we parked we walked to the beach and came across a large dunes. It reminded me a lot of the Oregon Coast with the dunes before the beach and provided a bit of comforting nostalgia. Down at the end of the beach stood the lighthouse standing guard and is the oldest structure in Miami-Dade County. The beach is a bit more narrow than Crandon so it sometimes seemed a bit more crowded, but mostly with families and wasn’t a South Beach feel at all. We hung out at the beach sunning, reading, and going into the water. After a few hours we went exploring and went up close to the lighthouse. There are tours every Thursday-Monday at 10:00 AM and 1:00 PM but we missed it by a little bit. Instead we walked around and checked out a few displays that relate to the lighthouse and then walked down a few of the many paths in the park. The sun was beginning to set and there were some incredible views with the water and spots that were much quieter than the beach.

In addition to the lighthouse, beach, and trails there also is a snack bar and restaurant- Lighthouse Cafe on the beach and Boater’s Grill on the Bay. There also are bikes that you can rent, including the big bike carriages that holds multiple people. There is definitely a lot to keep people entertained and a lot of extras over just a regular beach (the lighthouse, concessions, hiking, biking). The dunes, heavy foliage, and lighthouse also give Bill Baggs State Park a lot of charm and beauty. I really enjoyed my time there, found it really relaxing, and will highly recommend it to my friends as well as you. 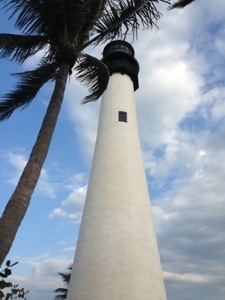