One of my friend always does birthdays big! Whether it’s trips to Siesta Key or a big weekend in town she goes by the motto Go Big and Don’t Go Home! The weekend before her birthday she did it big on South Beach, but for her actual birthday (a Tuesday) she wanted to get a big group together for dinner. Since it’s Miami Spice (quick description of Spice in my Oak Tavern post) she wanted to pick one of those restaurants, but with a lot of the restaurants space was an issue for a group so large as ours. The perfect solution was Biscayne Tavern inside the new b2 boutique hotel on Biscayne Blvd, which not only had the space for our group, but also has a lot of great options for those not wanting to commit to the full Spice menu.

We were a pretty big group but they were great about accommodating us and letting people do separate checks. Prior to the night it seemed like a lot of people wanted to do Miami Spice, but day of a lot of people seemed less committed. I was torn because there were a number of al a carte things I was interested in, but it seemed like Biscayne Tavern had the right combination for me to do Miami Spice. The reason I haven’t done Miami Spice much before is it’s hard to find gluten-free options for the appetizer, entree, and the dessert. I decided to base it on whether the spicy baby back ribs were gluten-free. They in fact were so I got that along with the goat-cheese stuffed dates for an appetizer and cheesecake (eaten without the crust) for the dessert.

Long-time readers know I love bacon wrapped dates (my favorites in Miami are at Sugarcane or in Portland at Tasty n’ Sons) so that’s why they were a must despite several other apps I were interested in. I’m not sure if anything can live up to Sugarcane’s dates, but Biscayne Tavern’s were pretty good. They reminded me a lot of Tasty n’ Sons, but instead of having almonds and maple syrup it had pistachios and a balsamic glaze wrapped in beef instead of bacon. It was quite sweet, but also a bit savory. The ribs came out smaller than I was expecting, but still were really good. Parts were quite crispy with the BBQ sauce and it almost reminded me of crispy orange chicken with a bit of a kick (admitting here I’ve tried orange chicken even though it isn’t gluten-free), but other parts fell off the bone like the tenderest of ribs. Given that I couldn’t have the crust the cheesecake was just regular cheesecake filling, but it still was enjoyable. Overall I was pretty happy with this Miami Spice meal and that it was all (minus the cheesecake crust) gluten-free. It also came with a beer on draft, but I instead opted for a Diet Coke.

A few other people got Miami Spice, but I would say most opted for different appetizer combinations. Overall it seems that the crispy gulf shrimp dynamite was the biggest favorite. The shrimp looked coincidentally like little pieces of orange chicken and came with a kick people said. Other people got the dates, pork belly sliders, homemade potato chips (something I really wanted to try!), and braised short rib sliders. Everyone seemed happy with their choices and Biscayne Tavern gets a lot of stars for its upscale bar food!

A few people did do Miami Spice, including a friend who got crispy gulf shrimp dynamite, the braised pork shank, and the chocolate chip cookies. The braised pork shank came with a jelly of sorts on top, which she wasn’t a fan of. When scraped off she thought it was decent along with the spaetzle (noodles) it was on top, but nothing special, especially given the price. Overall from the group it seemed like Biscayne Tavern does bar food and appetizers well, but entrees are a bit of a mixed bag. My ribs as part of Miami Spice (with app and dessert) were a good deal, but I’d need to decide if I’d get it again under the regular price.

Biscayne Tavern has an upscale feel, while still having the bar vibe. We got there just a little bit after Happy Hour, but a few people had gotten some Happy Hour drinks and it was a pretty good deal ($3 for draft). I think Biscayne Tavern could be a cool place to check out when you’re looking for a laidback place to drink (not so common in Brickell/Downtown) and at least during Happy Hour the price seems to be right. If you’re looking for a relaxed, but upscale, place to grab drinks and gourmet bar food Downtown then Biscayne Tavern is definitely a place to check that out! 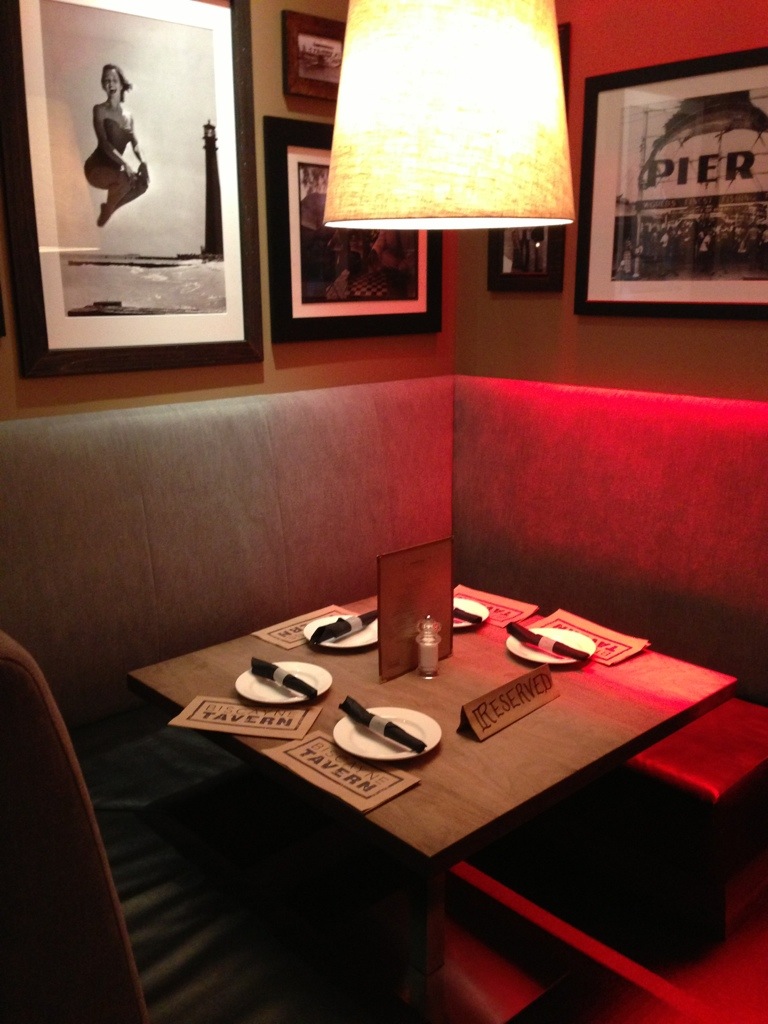