On Wednesday I had a work lunch and we went to the new Spris location in Midtown across from our office. A while back I had seen on Yelp that the Spris on Lincoln Road had gluten-free pizza, but hadn’t checked it out yet. I was excited for them to open in Midtown and hopeful the gluten-free pizza was true and available there. The other week I walked by and saw gluten-free crust on their menu so it had shot to the top of my must-do list.

As some of you may know from my other posts I’m a pretty simple eater (a nice way of saying a little picky) so I was looking for probably just a pepperoni pizza or something. Given that Spris seems to shoot for pretty authentic Roman pizza I didn’t see pepperoni on the menu. The person I was with ordered pretty quickly so I felt a bit of pressure to choose. Quickly scanning I came across the carbonara pizza, which came with tomato sauce, mozzarella, Pancetta, sunny side up eggs, Parmesan and black pepper. I also caught what looked like a regular sausage pizza, but when I asked the cashier about the carbonara pizza she definitely recommended it so I got that.

The pizza came out and was a very thin crust. I would say usually I don’t like thin crust as much, but I really enjoyed this one. A lot of gluten-free pizzas can tend to be pretty dry (especially thin crust), but this was more “dry” from being light and baked very well done. This also had a great ratio of toppings to crust. I would say usually my beef with thin crust pizzas is that the cheese/toppings are “thin”/light on top, which was not the case here. The mozzarella and slices of Parmesan made for a great combination and I’m a big fan of Pancetta. The sunny side egg up was an interesting add on. I also thought the tomato sauce was just the right amount to not be overwhelming, but also not make the crust seem too dry.

Overall I was a big big fan of Spris pizza. I would say by far the most “authentic” gluten-free pizza I’ve had in Miami. Even though I generally prefer dough-ier crusts and more “American” style pizzas (the kind of greasy cheese, pepperoni) I feel confident saying Spris is also just the best gluten-free pizza I’ve had in Miami in general. Even comparing it to really good pizza in Portland and the West Coast it’s up there. It’s also not super super expensive. Low to mid teens for a good sized pizza. The gluten-free crust is only a $1 more than regular pizzas, which is nice when it costs like $17 for an alright gluten-free pizza from Dominos (that’s smaller).

Spris also has this thing called “Beat the Clock” where from 5:30-7 PM the cost of one of 3 popular pizzas is the time you come in (5:45 = $5.45). I’m not sure if gluten-free pizzas are included or if maybe they’d do that price plus the usual $1 for gluten-free pizza. Thinking probably not, but I’ll have to ask next time I am in there.

Gluten-frees should make a trip to Spris in Miami Beach or Midtown. It’s definitely going to be a go-to place for me (way too convenient across the street….).

UPDATE: So the Spris in Midtown is a casual version of the one of Lincoln Road I discovered. There also is a location in downtown like the one in Midtown. I’ve gone many times and you can check out some of pics from those trips below. Depending on your tastes I don’t think you can really go wrong. Also excitedingly the gluten-free pizza is available during the “Beat The Clock” special for only a $1 more. So if you go in at 5:45 you pay $5.45 plus $1 for one of three types of gluten-free pizza (including the salami version). 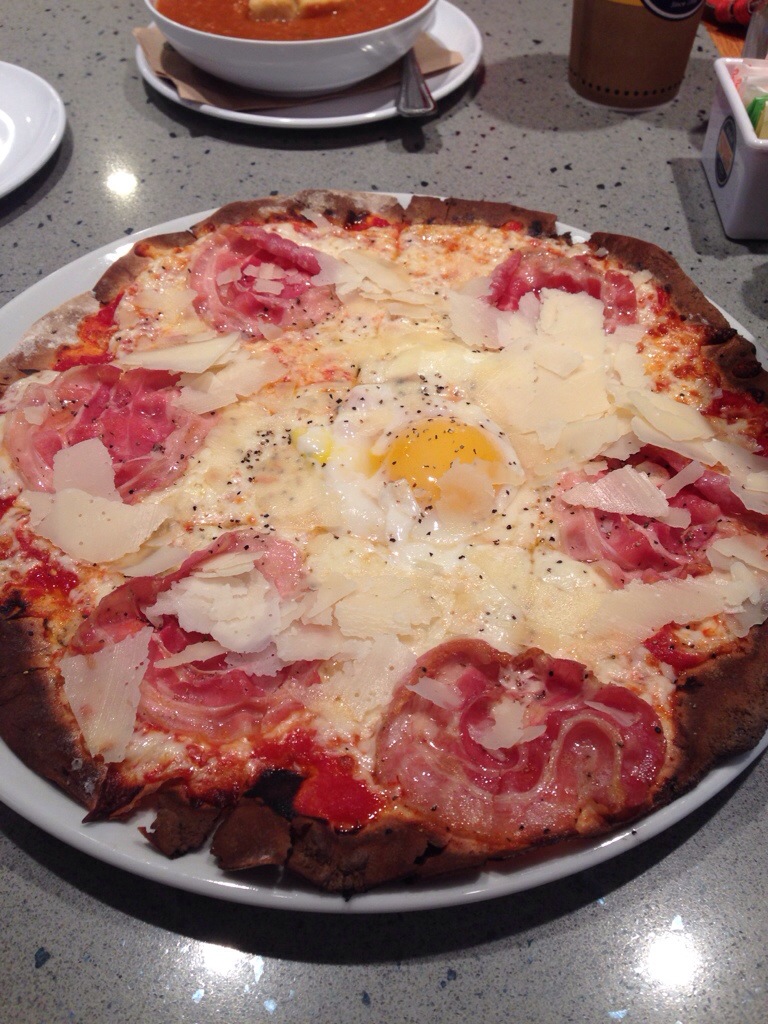 3 thoughts on “I must not get this everyday for lunch. I must not…. – Spris (Gluten-Free Pizza, Midtown, Miami Beach, Restaurant)”