One of my friends is really great at hearing about new restaurants (something I think I am pretty good at as well) and then trying them out soon after hearing about them (something I am not so good at). One that she came back in love with was Kush in Wynwood. There are a lot of new places opening up in Wynwood, which is exciting to see. Kush’s menu looked good, especially since they get all their ingredients locally. Kush has the same owners as LoKal in the Grove, which has been a place that’s been on the ever growing bucket list for awhile. Luckily I didn’t have to wait long to visit Kush (or let myself put it off) as another friend picked it for her birthday dinner.

Kush sits right on Miami Ave and NE 20th St. The space used to be a juice and sandwich shop, although I had never been inside. I had noticed the lights on sometime at night driving by and thought it looked like a little bar so it seems fitting that Kush moved in. It’s nice to have more restaurants and shops opening up that connects Edgewater/Biscayne with Wynwood. I remember one time a few years ago trying to walk to Art Walk in Wynwood from my first apartment (on 19th and Bayshore) and it being dead until NW 2nd Ave and the high 20s. That’s definitely not the case anymore, which I love. Now if I only I still lived within walking distance…

We got there around 6 (this was a Friday) and it was the perfect time to get there for our group. There were 8 of us and we got two little tables next to each other. Along the wall was a long cushioned bench and then there were four little stools on the other side of our two tables (two stools at each). We started off with drinks. On the outside they had a sign that said “No hostess, No Corona, No vodka, No clubby music. Just craft beer.” Written in grafitti on the wall was also “good bear ain’t cheap. Cheap beer ain’t good.” Needless to say it’s definitely a place for good craft beer drinkers. There was also wine and some whiskey drinks though. I didn’t see any cider, but I also didn’t ask since I didn’t feel like it that night (although there was a gluten-free beer).

In general the atmosphere reminds me a lot of a place in Portland. People have been describing Wynwood as Brooklyn a few years ago and Portland was supposedly the original Brooklyn so that make senses. The outside of Kush is pretty similar to before besides painting it and a sign. They kept the iron bars on the windows and the front pretty nondescript. You can’t really tell very much from the outside. The inside is pretty cool though with walls of bricks, the graffiti mentioned before, and a big lit up KUSH sign. There are only a few other tables besides the ones we were sitting at (4-5 others), plus the bar and some counters along the walls. The menus are printed on brown paper bags (which seems very Portland to me).

After the first round of drinks some of us also ordered some food. We started with apps. I asked the waitress if the Hobo Frito Pie was gluten-free and she said she would double check. My friends got the fried alligator and the boar sausage and fried pickles.

The Hobo Frito Pie (chili and onions over Fritos) was in fact gluten-free and I was a big fan. It came out smelling like Taco Bell (which I mean as a huge compliment) and tasted like it, but without the bad stomach side effects. For someone who can have only a handful of things at Taco Bell (because of the gluten) it was a plus! It came in an actual bag of Fritos that had been opened. I’m guessing the Fritos are not technically “local,” but we’ll give Kush an understandable pass on that one.

My friends really like the fried alligator (my friend who first told me about Kush raved about them as well) and they came with both spicy mayo and creamy garlic sauce. I forgot to ask my friend if she liked the boar sausage, but it was something I had been interested in ordering at first (although I can’t have the fried pickles). The homemade guacamole was also something that caught my attention on the appetizer list (save it for a future visit).

Only a few of us got dinner. The entrees consist of burgers, sandwiches, and salads. My friends got the chicken and waffles and one of the sandwiches. I was looking at a couple of the different burgers. Namely I was picking between the Kush & Hash (burger served with bacon, fried egg, hash, and waffle as the bun) or the Johnny Utah (hot pastrami, LoKal sauce, and the usual fixings). I went for the Kush & Hash burger without the waffle. The waitress came out later and said that they also wouldn’t be able to do the hash, because it was made with some flour. One of the things I really appreciated was the waitress’ diligence around me being celiac. I would have eaten the hash (bad assumption on my part) if she hadn’t asked the cook (and she did so with no prompting by me). She also pointed out the gluten-free beer to me. Although I am not a fan of the gluten-free beers (I feel it’s an acquired taste and just prefer cider) it was another sign of her great service.

So I ended up with a Kush & Hash burger minus the waffle buns (which the waitress said unfortunately was the best part) and the hash. It basically was a bacon and fried egg burger, but it was a good one at that. Syrup also came on the side. The fries that came on the side were really good though. Potatoey, but with a bit of crisp, and good flavor! Next time though I definitely want to try one of the other burgers that have more flavors/toppings and hopefully the LoKal sauce (on a few of the burgers) is gluten-free. My friend (the birthday girl) also gave two big thumbs up for the chicken and waffles.

I really enjoyed my time at Kush, both with the food and the atmosphere. The only downside is that the space is pretty small. By about 7 PM it started to be noticeably full and by 8 PM it was packed. It kind of was to the point where if I walked in at 8 I would have probably gone somewhere else just because there was’t really even standing room left. But when we got there at 6 it was a perfect time to go with a large group. At 7 you could probably do okay with 2-3 people at the counters or bar. A sign of and pitfall to of a popular place I guess.

If you’re a craft beer drinker Kush seems like a great option and if you’re a big fan of the chill, laidback vibe that’s been gaining steam at places in Wywnood (and elsewhere) you can add Kush to the list. I’ll be back to try more of their burgers and from my first visit the food definitely gets some thumbs up and has a lot of potential. 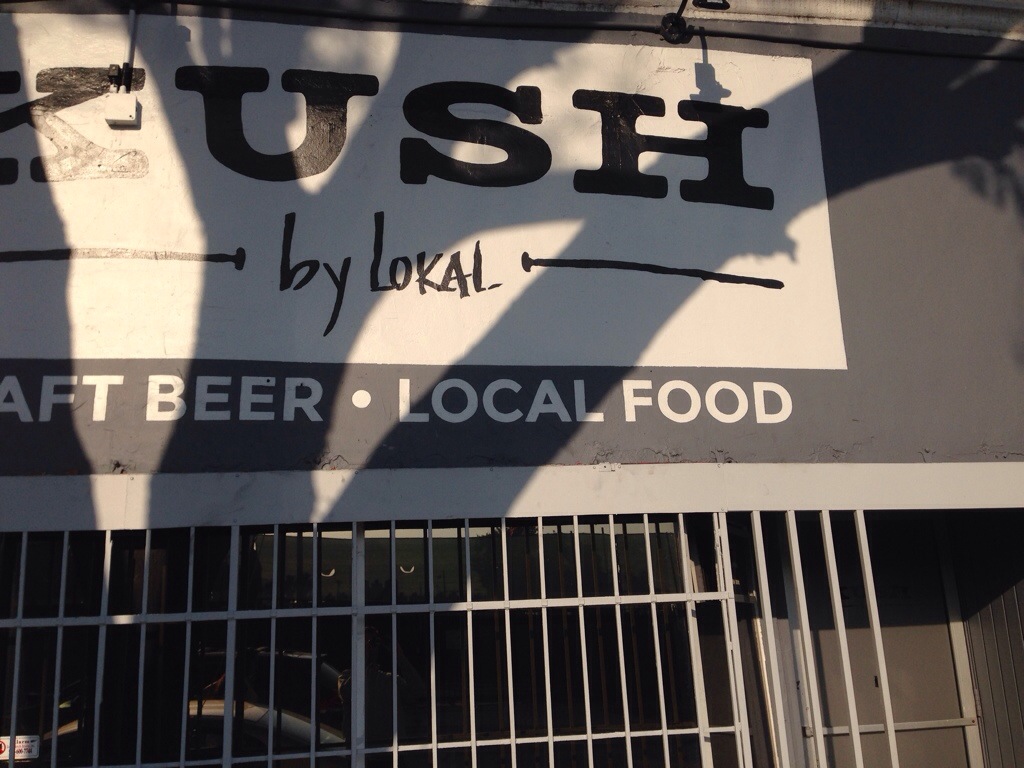 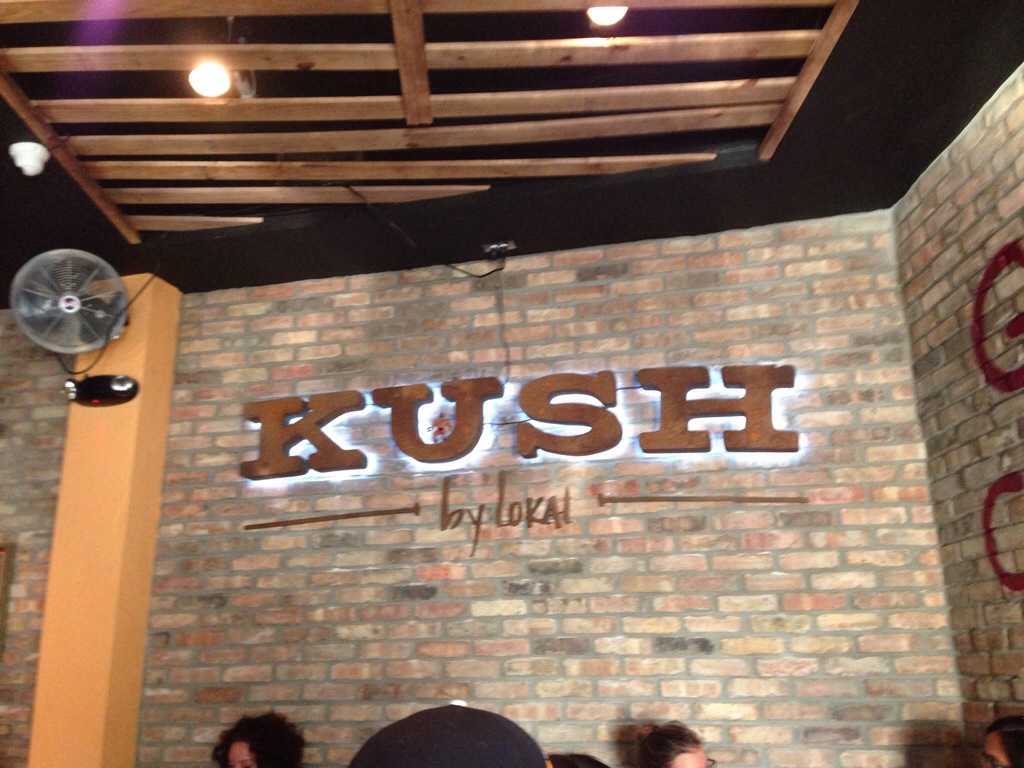 One thought on “Chill like the name implies- Kush Wynwood (Burgers, Craft Beer)”