For readers of my blog who have noticed my favorite foods tend to involve like bacon, cheese, chocolate, sugar, etc. (a bunch of guilty pleasures), it probably won’t surprise you that I am a big fan of ice cream (or its cousins). I really don’t discriminate as I get great joy from it, whether it’s a carton of Moose Tracks from Publix or the best gelato in Croatia. And just to be clear that statement by no means is meant to imply Moose Tracks is on the low end of the spectrum (it’s pretty awesome!).

Given my love of ice cream I closely read an article about Lulu’s Nitrogen Ice Cream coming to Edgewater. It opened up in the other wing of my first building in Miami, so that caught my attention even more, plus I’m a science fan, so I liked the nitrogen aspect. Nitrogen allows the ice cream to freeze extremely fast, so you can watch your ice cream be made right in front of you. The faster freezing also means smaller crystals, which makes the ice cream more creamy.

I decided a visit would be a treat and on a very hot summer Sunday a month or two after it opened I figured it was the right occasion. There are a few small tables along the windows, but most of the space is dominated by the counter. Behind a glass panel are several mixing machines under pipes to release the nitrogen. I took a look at the flavors and decided to go for the traditional vanilla and then the Nutella in a bowl. They also have some sorbet flavors and they have vegan ice cream options (made with coconut or almond milk and then bananas to make it more creamy).

While I waited I saw some mint plants growing on a shelf (well I couldn’t literally see them growing in front of me, but you know what I mean). Lulu’s gets most of their ingredients (including milk) from local farmers and that’s why their flavors change based on what is available. They then have a few ingredients (like the mint) that they even grow in house. They also have house made waffle cones, which I witnessed being made while I waited. All of these ingredients are combined right in front of you- the milk, the cream, and then the flavoring (like just a plop of Nutella). As simple as that.

It was cool to see an “explosion” of liquid nitrogen when it hit the air around the ice cream. It reminds me of Halloween and the carbon dioxide gas off dry ice, but this is on a much larger scale. A few little kids came in and were just in awe for a second staring up at the gas. They then burst out into excited laughter.

I received my ice cream and took it to go. Yeah this is really good ice cream! The creaminess is definitely what you would expect from the description of smaller crystals. The vanilla just kind of melted in my mouth. It was also very refreshing and a treat to have it be very pure and authentic vanilla taste. Of course there is still sugar inside and it’s very much a treat, so I’m not going to try and make the argument it’s healthy like fruits and vegetables, but it’s nice that it’s not crazy sugary and artificial.

While I enjoyed the vanilla, the Nutella was the utmost treat. Having the Nutella itself mixed in made it like frozen, whipped Nutella cream. The texture was just awesome. At times it was more creamy and then it was Nutella-y. It all mixed together was a very enjoyable experience from the texture itself. Certainly with the millions of Nutella fans around the world, the flavor was also very good. I liked what the milk and cream added to the flavor (though both in texture and taste the Nutella was the main star).

Lulu’s is a cool experience to just see the ice cream being made. The ice cream itself is also delicious and a nice fresh, authentic, not super sugary treat. The vanilla was very good, but the Nutella was something quite special. If you’re an ice cream fan, nitrogen ice cream is something you have to try at least once. If you’re with kids it comes with some built-in entertainment, plus isn’t super processed and sugary. It’s also just a block from Margaret Pace Park and Biscayne Bay, so it could be the perfect stop before or after a nice walk along the water. Lulu’s certainly gets a recommendation for a stop if you’re in the area and possibly a worth-the-drive rec if you’re a big ice cream fan. I think you can even see the creaminess in the pictures below! 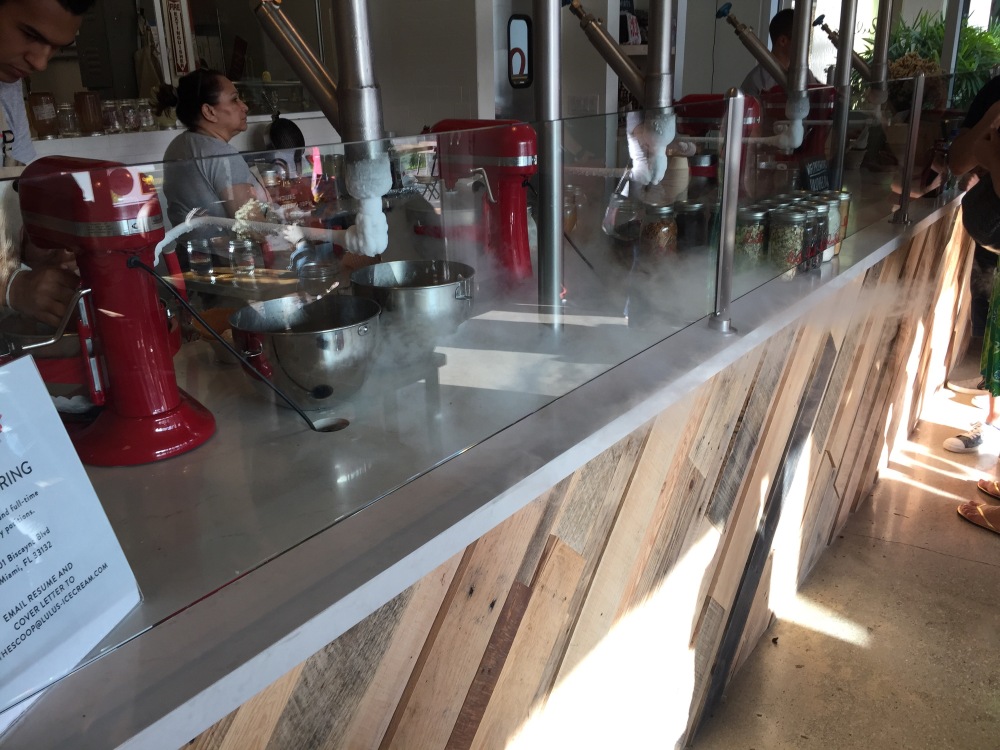