The other week my aunt and my uncle’s mother were at the Las Olas Art Fair in Fort Lauderdale and I texted with them about meeting up for lunch. I scoped out a couple different options up in Fort Lauderdale, but kept being drawn back to a place that had been on my list the last couple months- Fresh First Cafe.

Fresh First is entirely gluten-free (hooray!). I had come across it a few months ago in my frequent Yelp and Google searches for gluten-free options in South Florida. Back in July my plan had been to visit it before a flight out of Fort Lauderdale. That flight was to Chicago though, where I had many gluttonous gluten-free meals planned. With those meals in mind, I decided to hold off on a visit (thinking it better for the wallet and the waistline).

Fresh First is set in a little business park/shopping plaza off 17th Ave near the Convention Center and many of the hotels. It’s on the small-to-medium end with a counter and probably about 10-12 two-top tables that are separate or can be combined for larger parties. It was packed when I visited and got even busier when a big group of conventioneers showed up. Luckily we got one of the last available tables and were seated quickly.

As with any place that is 100% gluten-free, I wanted to order a lot of things. There are a wide range of sandwich options (including burgers), plus salad, soups, and bowls. Fresh First definitely has a healthy spin on all of its food, so there is a lot of fruit and veggies and things like quinoa in a lot of the different dishes. There are a wide number of vegetarians options and a good number of vegan options it looks like from the descriptions (plus some things are specifically marked as vegan).

I knew from the beginning that the chicken and waffle were a must. That was the easy choice. Mac and cheese also was a must (which is the case whenever it’s on the menu). I went for both of those. The understanding was that we would all share a bunch of things, so I also ordered the egg sandwich for us. My uncle’s mother got the fiesta brown rice bowl. My aunt got one of their juices, a smoothie, and an order of the potato leek soup. Unfortunately the owner came back to say that they were out of macaroni and cheese… That was a pretty big disappointment given how much I love mac and cheese. I ordered the spinach chicken burger to replace it. For the dishes that came with sides we got the red and sweet potato salad.

The potato leek soup came out first, plus my aunt’s juice. I don’t eat a lot of soups, but I’ve been impressed with heartier soups that are gluten-free that I’ve tried. This was thick and a bit creamy and had a lot of comforting potato flavor. I don’t think I’ve had leeks before, so I can’t comment really comment on how much that taste was present, but I liked the soup overall. My aunt also enjoyed her juice, which was their Pink version (watermelon, cucumber, lime, and mint).

The rest of the food began to arrive and we dug in after I divided them into pieces for sharing. I tried the spinach chicken burger first, which was a chicken burger (ground in house) with spinach, goat cheese, a cranberry chutney, and a savory bun. I had decided to go for the burger because it came on the savory bun (the other sandwiches I picked came on waffles or waffle buns). The quality of the burger’s ingredients were clear and the flavors were very complementary to each other. There was also a nice contrast between the sweeter cranberry chutney and creamy goat cheese with the savory bun, chicken, and spinach. The bun was pretty solid (held together and not dry), but it was more in the background of the dish compared to the fillings. I was very happy with the burger overall though.

My aunt and my uncle’s mother had tried the breakfast sandwich first and were raving about it. I tried it and the big winner was the waffle bun that it came on. It was light and airy, which was a nice change of pace (I feel like a lot of gluten-free waffles are extra crispy to compensate). It also wasn’t very sweet, which I liked for a breakfast sandwich. The textures of the waffle with the fried egg, turkey bacon, white cheddar cheese, and tomato were a good combination (and a good combo of nuanced flavors). It was a filling sandwich and we were big fans.

I last had the chicken and waffle, which I was very excited about (I never had chicken and waffles before). It wasn’t the more traditional (I think) fried chicken on top of a waffle, but instead was a chicken patty. This had the same waffle from the egg sandwich that we loved. There was a fried egg on top and it sat in a spicy Hollandaise sauce. The chicken and waffles took everything I loved about the texture of the breakfast sandwich (the light and fluffy waffles, the fried egg) and exploded it with more flavor. The spicy Hollandaise sauce was particularly delicious and enjoyable. The waffle seemed to soak up some of the sauce, which was very nice. This was a big winner and I will have urges for this dish very frequently I expect.

One of the other big winners was a little bit of a surprise. We had ordered some of the red and sweet potato salad on the side (other options are a salad or coleslaw). I was expecting a chunkier, vinegar based potato salad and hadn’t given it much thought (just chose it over the salad or coleslaw). Instead it was almost like a mash and very very delicious. It was one of my favorite things of the meal. It was crispy in parts, but also had the chill and hardness you’d expect in a potato salad. I think the chill helped you focus on the flavors a bit more, which were really great flavors. The combination of the two potatoes gave a nice punch and there was a bit of a kick to it. It also seemed a bit creamy, although it wasn’t mayo-y or dairy heavy it seemed. The great flavors combined with the “creaminess” and a bit of richness kind of made it the perfect unexpected replacement for the mac and cheese. I ordered an extra side of it, because it was so good!

My uncle’s mother enjoyed her fiesta rice bowl, but I felt it didn’t measure up to the awesomeness of the other dishes. The other dishes just had tons of great flavor. The fiesta rice bowl was okay, but nothing special. It also seemed to have a lot of different flavors going on and not in the most complementary way (mango was in there with things like onions and cilantro and a red pepper sauce). It just didn’t really compare to the other great things we were trying (but that is more reflective of the other dishes).

We were quite full, but I was intrigued by the dessert options, including a quinoa cupcake. That wouldn’t be something I would usually lean towards, but I was intrigued. Unfortunately they were out of that, but they did have some of the chocolate chip cookies. We went for two of those to share. This cookie was a real treat! It was gooey and warm and had a rich cookie dough taste (plus some rich and melty chocolate chips). I used a lot of self-control to not order several more.

The big takeaways from Fresh First is that their dishes are made with a lot of fresh and quality ingredients. The sandwiches and potato salad we tried were all excellent combinations of flavors (and many had some great combination of textures involved). Some were just overflowing in flavor. Their gluten-free baking is very on point with the waffles and chocolate chip cookie. The owner (or who I am assuming to be the owner) was also extremely attentive and very knowledgeable about the dishes and making suggestions. She provided excellent service. I’m really looking forward to a return visit. The chocolate chip cookies (if available) will certainly be part of a return meal (and the chicken and waffles are likely). I’m hoping their macaroni and cheese is also available on a return trip. If you’re staying in one of the nearby hotels or attending a convention Fresh First is a great choice (whether you’re gluten-free or not). If you’re gluten-free in Broward this is highly recommend for a visit and worth the drive! 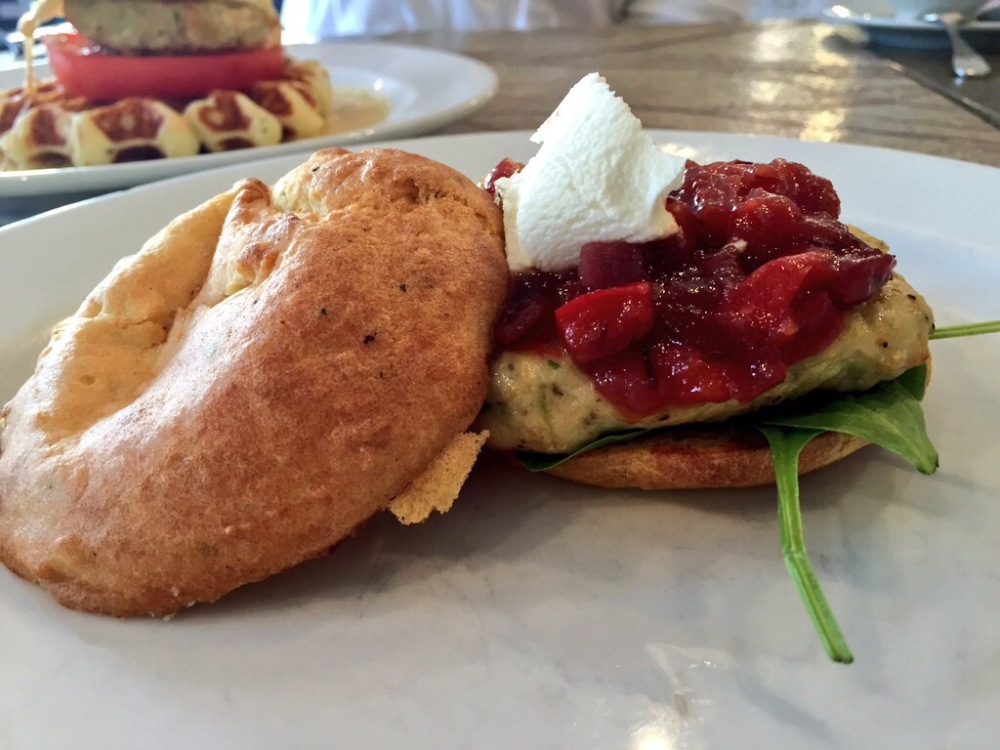 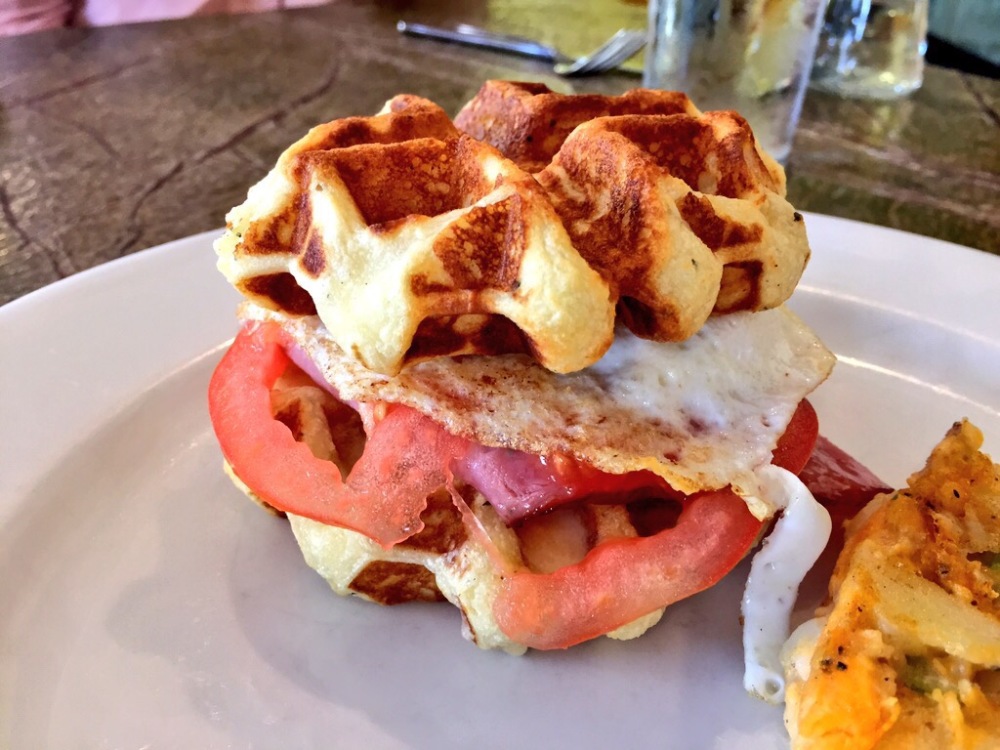 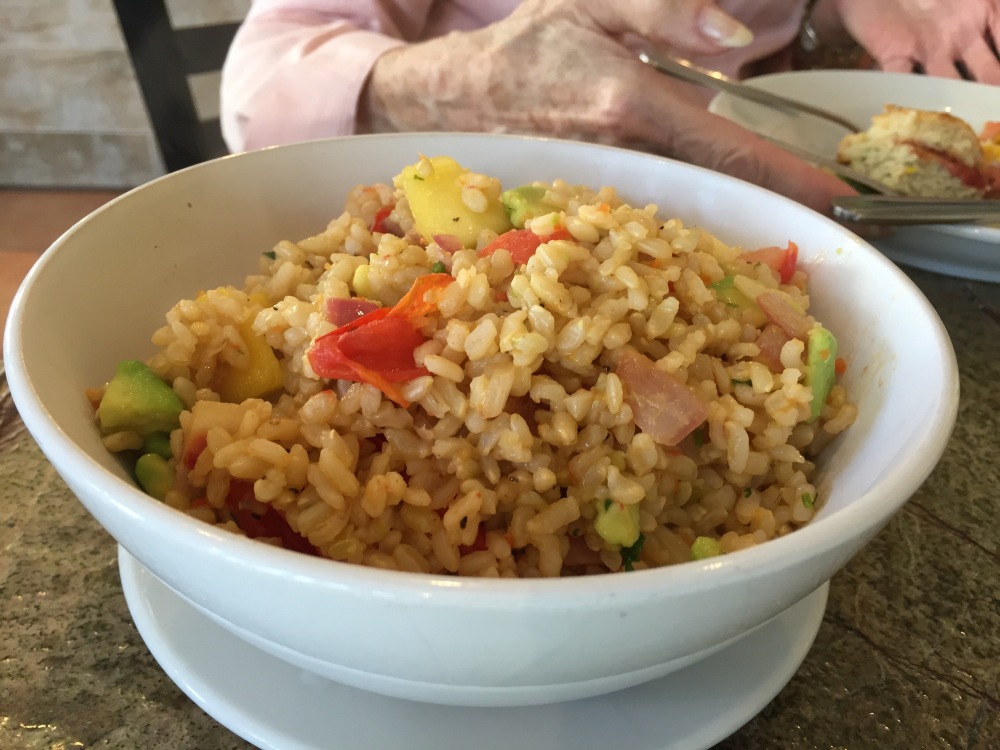 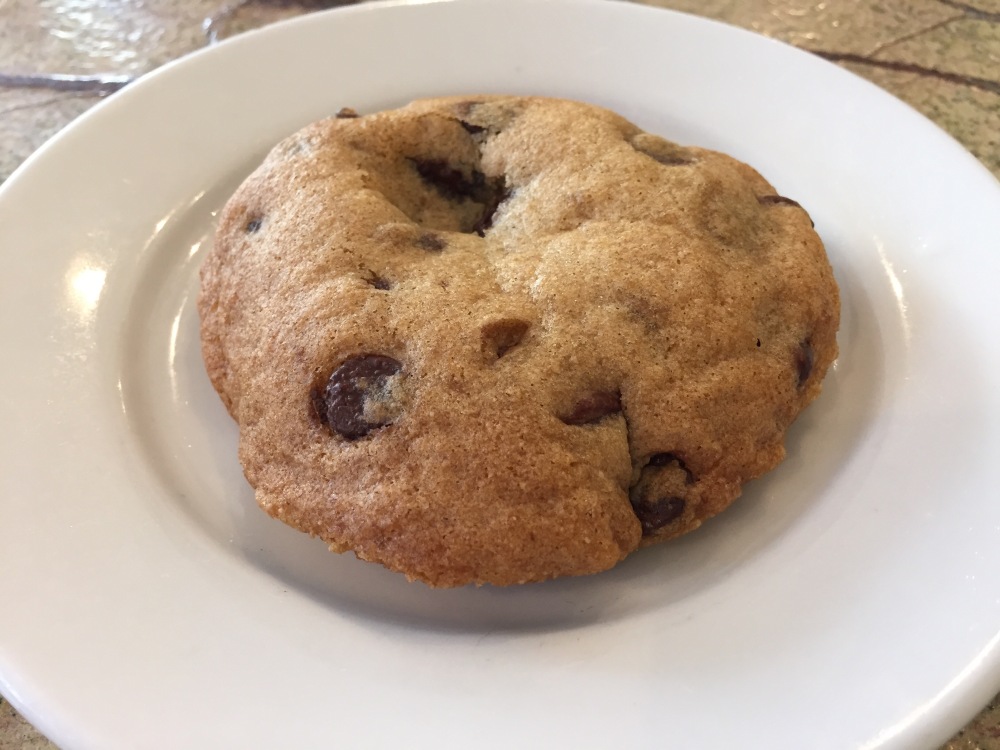 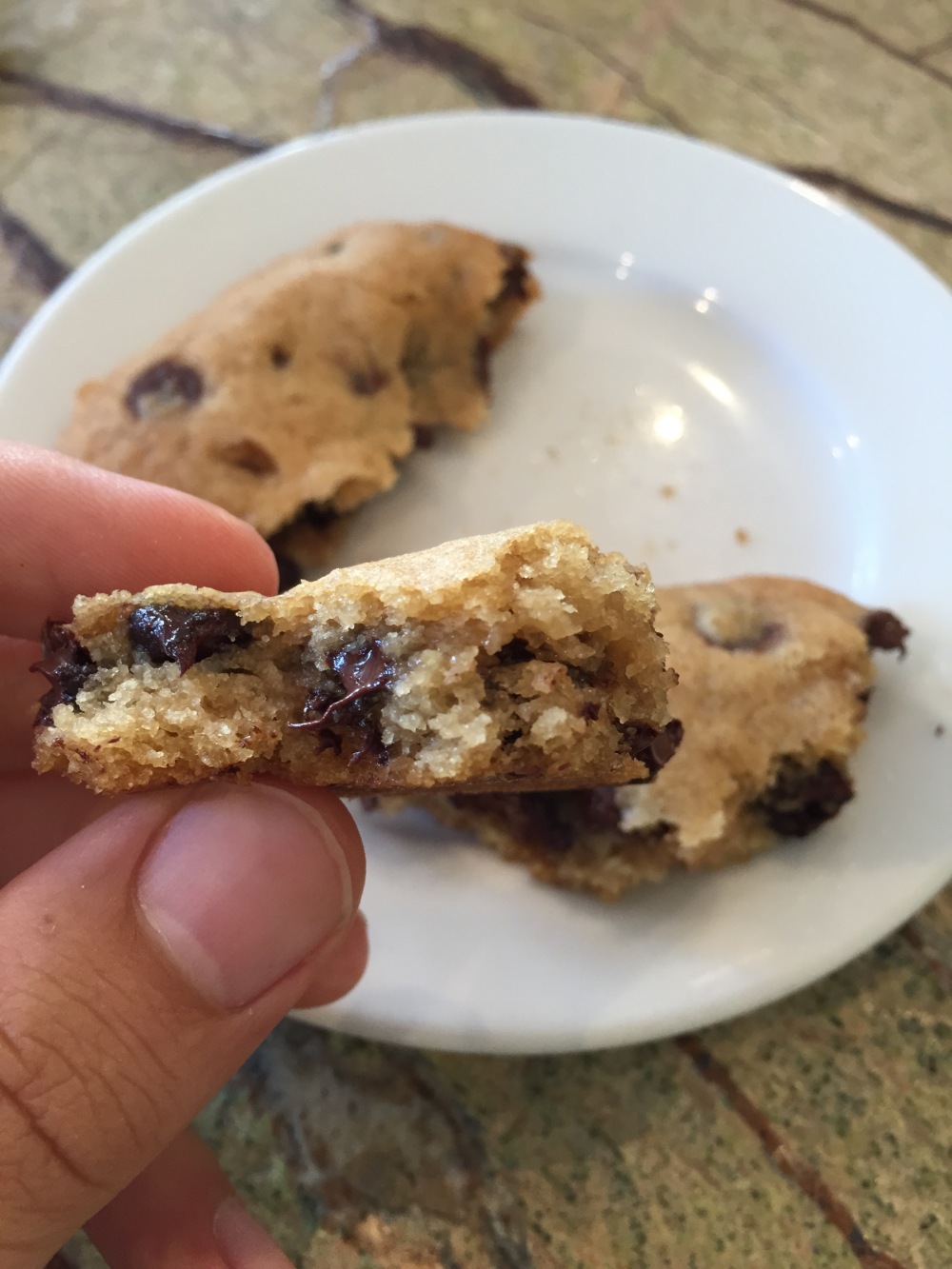 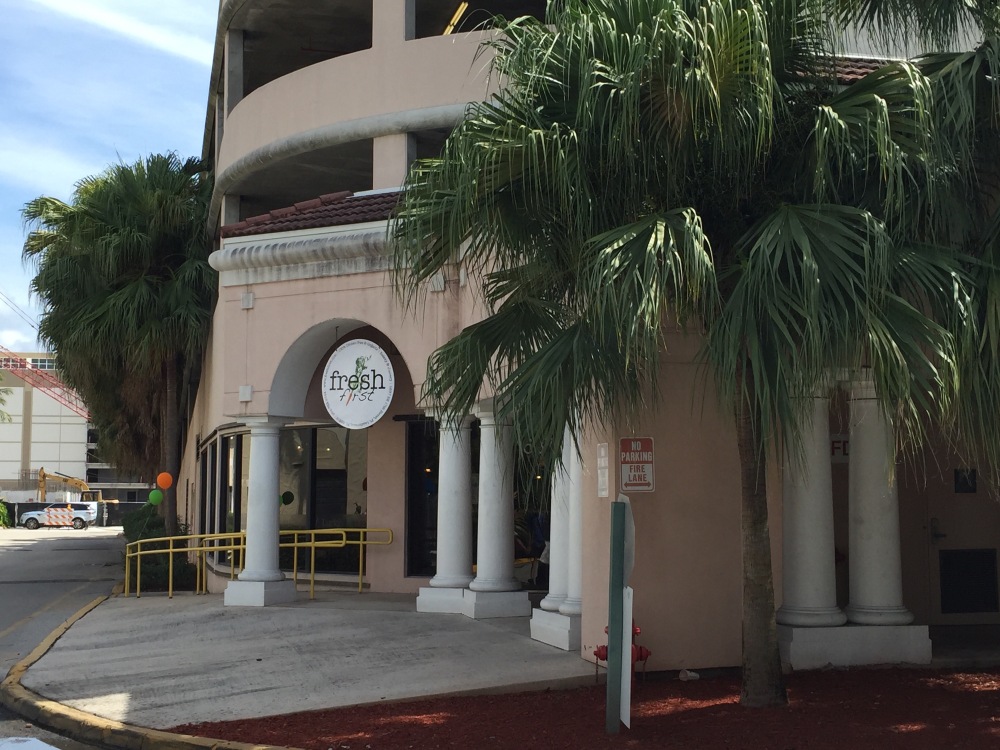